After a few months of testing, Google is finally launching a new graphical interface of its search bar which includes a new menu that uses icons.

Most of those who do research on Google know how the search menu is graphically speaking, but few, perhaps, remember that Google had icons next to search filters since 2010 on desktop and from 2011 on mobile devices.

Then in 2011 Google removed the icons from the desktop version, making many changes to the top bar over the years, many of which can be found in the user interface archives.

Today, instead, after a few months of testing it seems that Google has started to launch the new search bar by going to use the icons. Instead of just using text to show the various search categories or use vertical categories for news, videos, images, maps, purchases, and so on, Google has begun to show icons that also represent those categories. 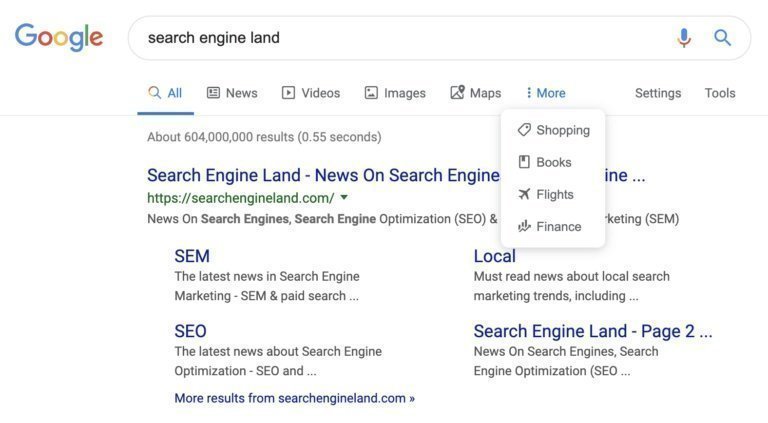 As you can see in the screenshot from Chrome on Mac made by the authors of Searchengineland.com the new menu is already visible on numerous browsers and operating systems, both inbound and outbound from Google, so much so that they were able to view the menu in every single test they have done.

Certainly, we are always in a roll-out phase, even if Google has confirmed to Search Engine Land the new menu is available for users today.

During the weekend numerous reports were recorded by readers who are seeing the new Google search bar and for some time we are able to see it constantly on all browsers.

The news, perhaps not very interesting for many, is instead important because it changes the user interface of one of the most used websites in the world.

Once again Google goes to prefer the user experience,  trying in every way to make browsing within its search engine as easy as possible, making it easier for users to find, quickly, everything they are looking for, doing research divided into categories…

Will the new look have an impact on search marketers or Search Engine Optimization?

As we have said before, this change will probably not have a great impact, at least for now, even if studying the new Google search menu in detail can certainly help to understand how Google itself scours the web by macro categories and how this helps its users to do research.

Then whether or not it will have an impact on SEO and organic research we will see it over time, when users will have taken the hand with this new way of doing research, also because, unfortunately, it will have given only a new look to the search results page of Google, even if we, sincerely, think that there is much more behind the new restyling than a simple graphics and aesthetic modification.